Over the last several months Fabric Row in Queen Village has seen its share of excitement, and not the kind we like to boast about. A fiery blaze ripped through Jacks Fabrics destroying the entire plot it once called home. Empty remnants can still be seen at their old location of 4th and Fitzwater.

Fabric Row saw firetrucks once again last week when Anh’s Custom Tailors Cleaners caught fire. Not compared in damage to Jack’s but a set back non the less. Most of the building was destroyed and remains unstable, while they were able to preserve their window display. Upper floors of the building saw the most damage with bent siding and broken windows. Since the first floor received minimal structural damage, it wont take long before Anh’s is back up and running. Question is… When and what will occupy that huge hole where Jack’s used to be?

A photo of Fabric Row in the 1920’s
(Image Source: nakedphilly.com)

Beautiful historic Columbus Hall, recently home to Ma Ma Yolanda’s, is getting some big new changes. According to the zoning permit, part of the fire tower is being demolished, with a large 4th floor addition being added to the rear and a roof deck out in front–this is coming as the whole structure is renovated to a nine family dwelling.

We’re looking forward to the re-use of this grand Bella Vista icon and the potential for this stretch of 8th Street. With the incoming Growlers just a few doors down, gorgeous Cianfrani Park just up the street – one where we’re often known to hang – and hopefully a new coffee shop on the southeast side of 8th and Fitzwater, we’re sure that the people who move here will be more than a little pleased with their surroundings. 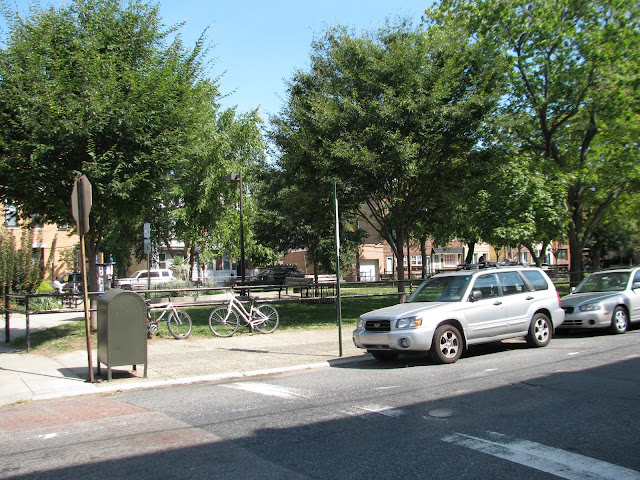 Hidden away at the corner of Marshall and Clymer, just south of the 600 block of Fitzwater, we discovered two large new Bella Vista rowhomes going up.

JKR Partners is the listed architect of these handsome brick bad boys feature off-street parking–kind of important on a street too narrow to have any–and a mansard-inspired roof.

More details, including whether or not they were sold, as soon as we can get them!